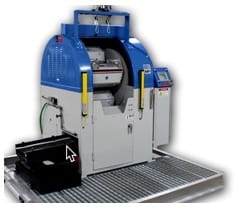 The HZ Series Finishing Machines are the most economical, high speed finishing equipment available. The variable frequency speed control permits fine finishing and polishing at slower speeds and aggressive deburring and edge radiusing at higher speeds. Four barrels are mounted at the periphery of a large turret. Each barrel is loaded with media, parts and water to approximately 50% to 90% full.

During operation, rotation of the large turret creates a centrifugal force on the media and parts inside each barrel. This force compacts the load into a tight mass causing the media and parts to slide against each other, removing burrs and creating superior finishes. This action also reduces the cycle time needed to complete the finishing of the parts by up to a factor of 30 over conventional vibratory and barrel tumbling. Hand finishing operations can now be efficiently and economically automated with the HZ series machines. Results with this centrifugal barrel finishing equipment are consistent and predictable, every time.