Shot peening products are made and manufactured in the USA

What is Shot Peening:

Shot Peening is a cold-working method accomplished by pelting the surface of a metal part with round metallic particles thrown at a relatively high velocity.  Each shot acts as a tiny peen-hammer, making a small dent in the surface of the metal and stretching the surface radially as it hits.  The impact of the shot causes a plastic flow of the surface fibers extending to a depth depending upon degree of impact of the shot and the physical properties of the work.  Depths varying from .005" to .030" are rather common, but values either higher or lower than this range can be practical.
There is a momentary rise of temperature of the surface due to transformation of energy, possibly enough to affect the plastic flow of the surface fibers; however, the effect of shot peening is known as "cold working" to distinguish it from metal-flow at high temperatures.  The fibers underneath the top layer, however, are not stretched to their yield point and, therefore, retain their elasticity.  the under fibers are bonded to the stretched surface layer and after the peening action the inner fibers force the outer fibers to to return to a shorter length than that at which the stretched fibers would tend to remain.  In the equilibrium which results, the surface fibers are in residual compression while the inner fibers are in tension.

Shot peening is all about controlling the process of blasting. Shot peening is driven, protected and monitored by audits and specifications.  At the core of all blasting processes is the concept of transferring impact energy on to the component being processed. In shot peening, we monitor and control this impact energy by its major constituents – air pressure, media flow rate, constant media size, media shape and several other parameters.

The media used in the shot peening process can be, steel shot cut wire, glass beads, and ceramic beads.  Different media can depend on what your intended use it, and how delicate you want to be. 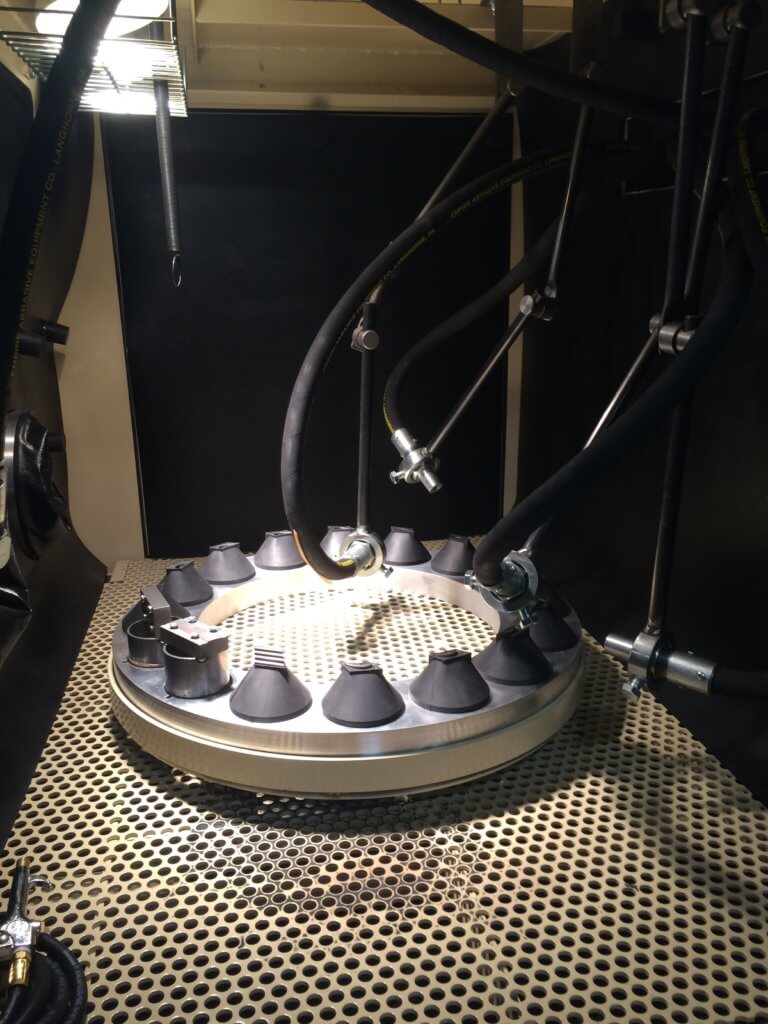 Shot peening uses both air blast cabinets and airless blast systems.  Air blasting is generally used for descaling, surface finishing and scale removal.  This is a cold working process, in which small spheres of metallic, glass, or ceramic materials repeatedly hit the surface of the product you are working on.  Airless systems are known as either "peening" or "wheel blasting".  Airless blasting usually creates a stronger casting metal, which is commonly used in aerospace and automotive.